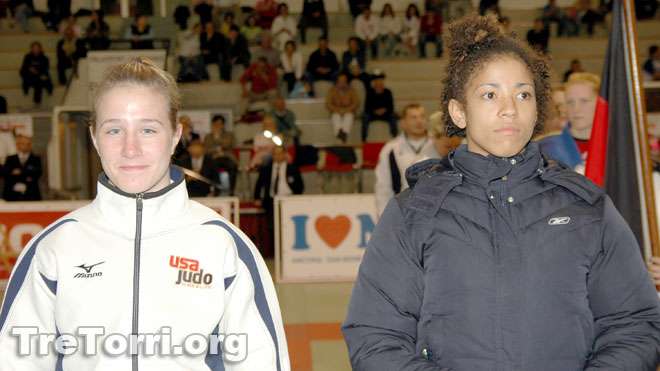 Results from the Judo World Championships 2013. Comments and summary by Tre Torri.

After commenting on the men’s events, let’s see what happened with the women at the 2013 Judo World Championships in Rio de Janeiro. Then we’ll end with the general classification of the whole competition.

To everyone’s great surprise, the world titles went to countries that are not generally used to winning at this level.

Kosovo took the -52 kg category with a very strong Majlinda Kelmendi and surprised everyone who follows the sport at an international level. Even though, this country is gaining momentum and is definitely a nation to watch.

Another country that is continually showing how strong it is becoming is Mongolia. Taking the World Title in the -48 kg category with Urantsetseg Munkhbat (to go with the silver in the -60 kg male with Amartuvshin Dashdavaa). In the early days, this country showed an altogether traditional Mongolian wrestling style but now we are seeing a judo revolution.

Predictable success went to the hosts: the Brazilian Confederation won a gold with Rafaela Silva in the -57 kg category. She’s a woman who has already tasted success by taking Silver in Paris in 2011. In this category, the second and third places went to two girls who are well known to Tre Torri: Marti Malloy and Miryam Roper.

This time, Malloy who had been defeated by the German Roper at the Tre Torri tournament, took revenge. More proof, therefore, of the value of our tournament in the panorama of world Judo.

Staying with Brazil, a silver went to Maria Suelen Altheman, in the +78 kg category, who had to surrender in the final to the Olympic Champion Idalys Ortiz. And two bronzes went to Sarah Menezes in the -48 kg category and to Mayra Aguiar in -78 kg, who faced another athlete we know well, the Canadian, Catherine Roberge.

A silver medal went to Japan in the -48 kg category with Haruna Asami. And this was the best result in the individual events for Japan but their women had more success later by winning the team competition title.

Israel is a nation that, from time to time, produces a truly world-class athlete. This year, the outstanding Yarden Gerbi showed the world her great technical and tactical superiority in the -63 kg category. The Israeli girl expressed great authenticity in the way she carried herself and, most of all, in the way she choked her opponent to win. This move has already been named, the “ Gerbi choke.” Indeed Gerbi strangled the Japanese Kana Abe in the semi-final before dismissing the French Clarisse Agbegnenou in the final.

In the -70 kg category, the Colombian Yuri Alvear made her presence felt. She had already taken the World Championship in Rotterdam in 2009, as well as numerous medals at the Pan American Games and Olympic Bronze in London 2012. At this year’s World Championships in Rio she was reconfirmed as a world-beater. With her extraordinary physical qualities, and her technical and tactical abilities, after winning, she gave thanks to the Heavens, or to her friends and family who had helped her reach this point, almost as if they were with her on the tatami.

In this category, Lucie Decosse, who came fifth, put in an honourable performance and gave a solid impression, still able to impress after a long and very distinguished sporting career.

In the -78 kg category, Gold went to the Democratic Republic of North Korea‘s Sol Kyong. In the final, she took on the Dutch Marhinde Verkerk who was assisted by the timeless Kris de Korte (who always manages to present world class Judoka – we only need to remind ourselves of the incredible Olympic Champion, Mark Huizinga).

This 2013 World Championship ended with Japan, as ever, showing us the very best Judo. Japan won the Women’s Team title and reflected the showing by Japan’s men who won three individual golds (one more than the French).

France performed extremely well and should be well-pleased by coming second in the overall standings. An outsider in the -81 kg category France took the Junior World Champion and will see more champions’ medals in the senior category with Loic Pietri. Teddy Riner reconfirmed his dominance in the +100 kg and is now unanimously considered the “winner”. Unfortunately, the great Teddy (an undoubtedly incredible athlete), and as we have said before,  is competing in a category in which there is no real opposition.

A total of twenty-three nations managed to see one of their athletes on the podium, eleven nations took away at least one world title.