Generous as ever, Hiroshi Katanishi knows how to enthuse with his demonstrations and primed them for Randori despite everyone feeling a little tired. 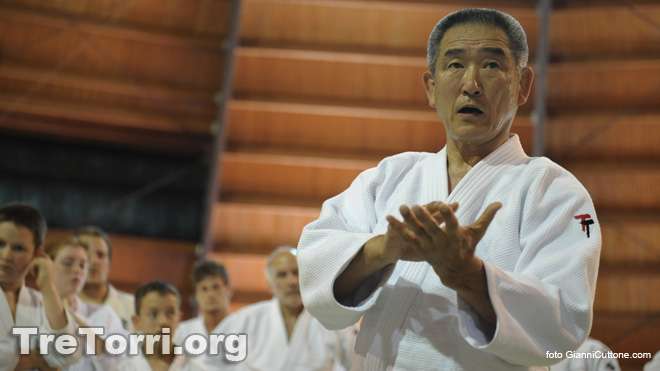 Judo Master Hiroshi Katanishi had the honour of finishing the second day here at Sarnano.

We started the day this morning at 7°, with floor work (Ne waza) with Y. Hirano.

In the afternoon, the lessons continued with Katame waza. Judo Master H. Katanishi was, as ever, profoundly interesting and explained exercises in preparation for the defence and counter attack using “Ebi” and “Yaku ebi”. The passion and spirit he puts into trying to understand the details in each area were an inspiration to the attendees and everyone worked harder, with him as the example.

He then moved on to an explanation  with educational movements which were very effective in demonstrating how techniques should be done such as, for example, making yourself into a bridge to turn Tori over and immobilize him through Yoko shiho gatame.

Judo Master Hiroshi Katanishi’s lessons are always incredibly engaging because the Master knows how to explain, with clear imagery, the importance of the movement above all else.

These exercises were designed and used to evade the Tori control particularly in Osae waza.