Kagami Biraki 2014, the great happiness of childrens on the Tatami 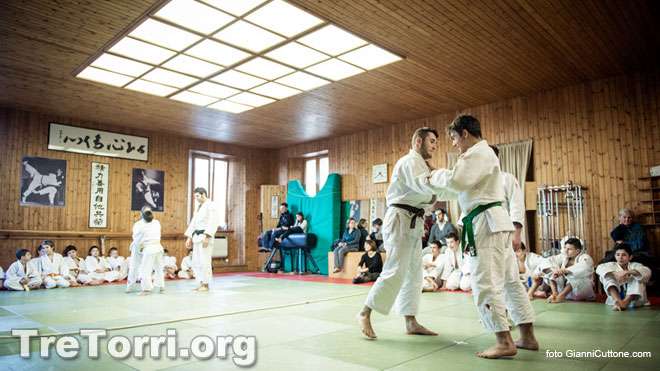 This year, for organisational reasons, we were unable to hold this traditional event on the second Sunday in January. So we held the Kagami Biraki on 26 January. It seems only yesterday that we held the first Kigami Biraki in 2011 but here we are, celebrating the fourth time we’ve observed this prestigious tradition.

The first two years were spent at the indoor stadium in Sarnano. Then, for the third year, we went to Fontescodella in Macerata. This year, given the inauguration of the ASD Dojo Kenshiro Abbe – Gruppo Marche we decided to organise the event at the dojo itself in Corridonia.

The Kagami Biraki ceremony is a traditional event that the Judo founder, Jigoro Kano, adopted in 1884, just two years after the opening of his dojo at Eishoji Temple, where his project of “Kodokan Judo” was being born.

It’s an important and instructive experience,  said Judo Master Corrado Croceri, a perfect moment to be together in different ways. In the morning, after the ribbon-cutting ceremony to inaugurate the dojo in the presence of the Civil and Military Authorities, there were some speeches and then a demonstration of Judo on the tatami.

Alternating the various speeches, talks and demonstrations, the programme was  extremely interesting and highly informative.

We organised lunch at the dojo, further enhancing the event and the moment of conviviality where, with everyone together – parents and children, friends and guests – we could appreciate the traditional Japanese menu and Eastern flavours.

The judoka ate on the dojo’s tatami whilst the parents and dignitaries ate in the rooms adjacent.

The programme continued in the afternoon with a theoretical explanation of the various Judo exercises, in particular how Shiai (a Judo “fight”) should be approached. Judo Master Corrado Croceri, assisted by the Technical Staff of the Dojo Kenshiro Abbe Gruppo Marche, provided a friendly competition with pools of 3/4 participants which made a truly spectacular addition to the day.

The result was highly entertaining and the “competition” without prizes was appreciated by everyone present. We believe that, by hosting and proposing this type of competition,  without a winner, we can overcome the concept of victory and defeat and leave everyone with a feeling of having achieved something precious and positive.

The programme ended with a cultural moment with the screening of the film about the life of Miyamoto Musashi, based on the novel by Eiji Yoshikawa.

This year’s Kagami Biraki had a rather challenging and intensive “playbill”, partly because it took part in our own dojo and partly because our own children were the stars of the event, making the tradition even more emotional and meaningful for the judoka and their families alike.

Kagami Biraki has its own reason for being, based on the tradition and needs of the time (1884) in which it was adopted into the Kodokan of Jigoro Kano. In our case, we have to say that the Kagami Biraki has been extremely useful for the purpose and goals we had set ourselves.

Judo Master Corrado Croceri, highly pleased by the day, reiterated that such initiatives are useful in reinforcing the motivation to practice and in helping the youngsters from his dojo dedicate themselves to their studies and to showing how much they know and can apply.

Kagami Biraki 2014 has produced a highly positive effect, emphasising the educational value of this tradition and the educational worth of Judo which, in our opinion, has no equal.

Judo is an intelligent, useful project to society which is becoming increasingly decadent and superficial, where possessions and appearance are placed before personal discovery and relationships. Our objective is to help show the value of Judo in all its multiple meanings and not just as a sport.