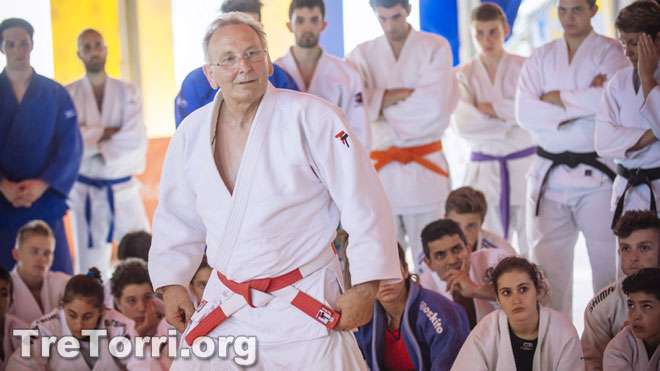 During the last Judo Summer Camp 2014, many changes were made which generated great interest. After having shown you the amazing videos of the event (which let you breathe the authentic, pure air of Judo during our main Judo camps), we wanted to explore in more depth the technical and didactic aspects, as well as Judo’s culture of discipline. We’ll start with the three lessons held by Judo Master Corrado Croceri and we’ll explain what was at the heart of them.

In Judo, great importance is given to the position, which is generally called Shizentai (natural position). In the first lesson, Judo Master Croceri, demonstrated the technique of  Tai otoshi (body drop).

Tai Otoshi within the throwing techniques, or Nage waza, belongs to the group known as Te Waza (techniques using the arms and shoulders). The interesting point about this technique is that Tori (the person executing the technique) throws Uke (the person executing the fall) by being in a two-legged position in which his centre of gravity is lower than Uke’s who, at the moment of his fall, finds himself in an unbalanced position.

1st Phase: Educationally starting from exercises of Tandoku renshu (solo practice without an Uke), this phase provides an awareness of the starting position and the ending position in order to correctly throw Uke in a controlled way. The importance of the stability of the ending position is emphasised. Tori, beginning from Shizen hontai (natural, upright body position), performs the movements of Tai sabaki or, to be more precise, of Mae mawari sabaki (forward movement of the body, rotating by 180°) to achieve the ending position for Tai otoshi in a dynamic way.

2nd Phase: Kuzushi (unbalance Uke or breaking Uke’s position) educationally starting with exercises of Sotai renshu (performing the technical movement with Uke participation), Tori starts in Shizen hontai, performs the movement of Tai sabaki (or Mae mawari sabaki) and emphasises the use of the arms to create the action of Kuzushi. Regarding breaking the balance of Uke, the detailed use of the hand at the sleeve and the hand at the lapel is put into focus.

3rd Phase: Tsukuri (study of the proper contact between Tori and Uke). Regarding this phase of finding the proper contact, various variations or “tuning” is explained based on the different potential opportunities for the technique, the physical build of Tori, and the direction of the throw.

4th Phase: Kake (final throw). This phase, studying the throw itself, is simply the logical consequence of the previous two phases Kuzushi/Tsukuri. The final control of the technique is highlighted. To better explain this aspect of the throw, the term used is Zanshin. Tori must keep his body under control as well as the body of Uke before, during and after the throw. Zanshin does not cover just the technical movement from the start of the move to the end: it also covers a mental state of consciousness that continues even beyond having thrown Uke.

5th Phase: Opportunity. Tori uses the movement of Uke in various directions. These can be provoked by Tori himself by pulling or pushing or by Tori simply adapting himself to the movements of his partner who decides to move in diverse directions.

Demonstration of a technique to counter Uchimata (leg technique – Uchimata means inner thigh throw and works by a deep strike on the inside left thigh of Uke, raising and rotating your body to the front left).

Note: the terms Go (defence by blocking), Chowa (defence by avoiding and anticipating), Yawara (defence by ceding in the direction of the attack) are generally not used in Japan. This terminology was used by Judo Master Kenshiro Abbe when he came to Italy in 1969.

In the second lesson, Judo Master C. Croceri demonstrated an uncommon approach to the techniques of Katame waza (techniques of control).

The subject was dealt with by the Judo Master by recalling the origins of Judo that take the name of Bujutsu (the art of the warrior).

This time, use of the Atemi (techniques to deal a blow to various points on the body) were taken to highlight the importance of Ma ai (various types of distance between the two combatants) and various ways to use the body to avoid different Atemi attacks, both standing and on the ground in Ne Waza (ground – or floor – combat). Particular attention was given to the study of Osae waza (techniques of immobilisation) and changes in control with different immobilisation techniques which must take into account the fact that Uke could hit the face or other parts of Tori’s body which, being hit, might cause him to lose control of Osaekomi (technique of immobilisation).

The lesson by Judo Master Croceri showed, in a reasoned way, why both Tori and Uke need to assume certain, specific positions in combat at both mid- and short-range.

In the third lesson, the Judo Master demonstrated an approach to the techniques of Nage waza (throwing techniques), beginning with the importance of mobility through mixing Shintai and Tai sabaki.

The movements in Tsugi ashi “right side, left side” do not fall into the Shintai nomenclature of Judo. In Judo, in every movement of the body, we need to maintain the position of Shizentai (upright body position).

The word Shin in Japanese has many meanings. Naturally, the word is pronounced in the same way but it can be written in various different ways, as we see below.

The Japanese above was kindly written by Judo Master Katsuhiko Kashiwazaki who helped shed some light on the meaning of Shintai.

In this study, it is assumed that the student has already acquired the skills and ability to perform the technique. Timing is, therefore, important and should not be discounted since choosing the correct timing goes a long way in reaching the final result.