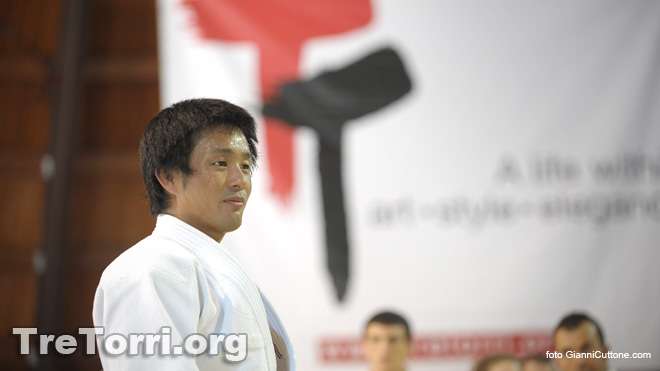 Yoshiyuki Hirano and a knowledgeable, intelligent progression in Ne waza.

The first day has just finished. In the afternoon session it was an honour to be involved in the technical and education themes of Ne waza by Judo Master Yoshiyuki Hirano, 5th Dan.

All the Japanese guests for this, the sixth year of the International Judo Summer Camp at Sarnano come from the prestigious University of Tenri.

Judo Master H. Katanishi continues the cohesion between judoka coming from this Japanese University that has been a centre of excellence for Judo and has produced some outstanding judoka.

The Judo section at the University of Tenri was founded by the legendary Judo Master, Yasuichi Matsumoto, who was a famous rival of the great Masahiko Kimura, as well as winning the Japanese Championships in 1948.

We have also had the great pleasure of working with the world famous Hiroshi Minatoya, 8th dan and twice World Champion.

From the same University, there followed Isao Okano, twice Japanese Champion, World Champion and Olympic Champion in Tokyo in 1964.

One more name to underline is the World Champion Yoshimi Masaki, rival of the incredible Yasuhiro Yamashita.

The list almost never ends and there is not enough space to name everyone but two more names that we’d like to mention are Tadahiro Nomura (3-time Olympic Champion) and Takamasa Anai.

Tenri University, therefore, is one of the most prestigious Universities in the world of Judo.

What strikes us most is the sense of belonging that exists between everyone who leaves the University and this sense strengthens the spirit of family that binds each person together.

But let’s turn back to the Judo at Sarnano. The first day was, as ever, full of interest and surpassed everyone’s expectations. Yoshiyuki Hirano, caught the attention of the attendees and mentioned how many more judoka there are this year on the tatami.

The theme was Ne waza and Yoshiyuki Hirano started with some fascinating exercises on mobility on the floor and then continued with a knowledgeable and intelligent didactic progression to finally arrive at various modes to fully control Uke (hairi kata) with different forms of osae waza.

The afternoon session ended with randori and the young – and not so young – displayed great spirit and passion.

All in all, therefore, an amazing first day! Everyone’s looking forward to the second day and we’re waiting with baited breath to see what’s going to happen.